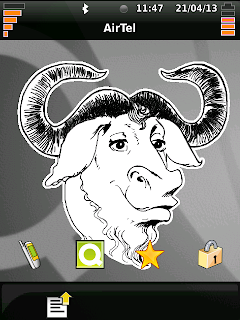 QtMoko is a userland smartphone stack implemented using Qt4. The history of QtMoko dates back when it was called Qtopia and  was intended for Greenphone developed by Trolltech, but after it was acquired by Nokia, it was renamed as Qt-Extended. Now with its current name "QtMoko" is maintained by enthusiast(Radek P and co.).
This is only a sneak preview of what features QtMoko/Qtopia/Qt-Extended(as it was previously called) provides, which makes use of Qt/C++. It has been ported to Qt4.8 (previous Qt-4.5)
The basic software stack is

Ranjit Pillai(InDi3MInD)
"Freedom" is a culture and is seldom enforced upon anyone. Select "the TeChNoLoGy" of your liking. Remember GNU/Linux is a culture and don't expect a miracle to happen in a day or two... Evolution == Evolinux Linux of yesteryear and the Linux of today ... it has taken great stride towards future.